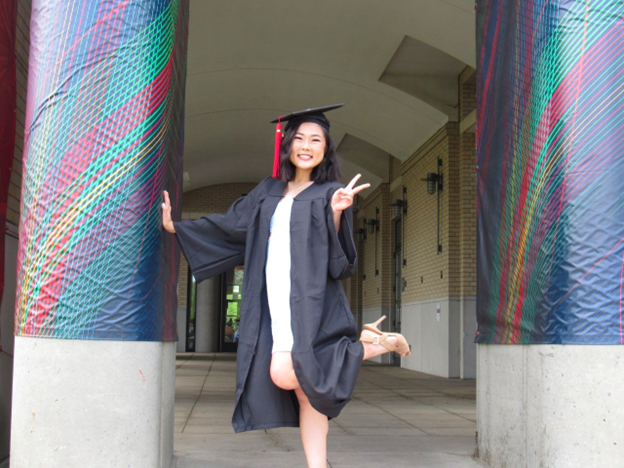 By Dennis GillanOctober 25, 2022No Comments

Hi, I’m Madeline, and I’m so happy that you’re here!

I grew up in Auburn, AL (War Eagle!). I graduated from Carnegie Mellon University with a degree in professional writing and a minor in business administration. That was where I got to meet Dennis, where he gave one of his “Suicide Stinks!” presentations. I thanked him for giving the talk, got a photo, and later published an article in the student-run paper, The Tartan, on his talk (https://www.madelinehkim.com/post/tartan-dennis-gillan). We later re-connected online, but I watched Half a Sorrow blossom from the sidelines… until now!

Throughout most of my life, I have struggled with my own mental health. College was a huge stressor, but it also gave me the opportunity to finally begin recovery.

My years in school differed from my peers. I spent time in different programs to help tackle the root causes of my mental health problems – time that my friends were in get-togethers or nights out. I felt ashamed not just because of my illnesses, but also for needing resources that most of my friends didn’t need to get by day-to-day life. I told as few people as I could (Tartan staff: thanks for covering for me in meetings!). But I realized that breaking my silence meant freeing myself from the shame brought on from keeping this secret: it could also help others take a step towards recovery.

“A shared joy is a double joy; a shared sorrow is half a sorrow,” we like to say at the Half a Sorrow Foundation. I witnessed that firsthand when I was conducting interviews for my article on eating disorder awareness on campus https://www.madelinehkim.com/post/tartan-eating-disorders). One of my interviewees told me that they declined seeking a higher level of care that was recommended to them by their treatment team. When I asked why, they told me that they didn’t want to be the only one at my (now) alma mater to be in such a program. After the interview, I asked if knowing even one other student who went through a similar route would have changed their answer. When they said that it would’ve at least paused their knee-jerk reaction, I knew that I found a new mission.

Fast-forward to 2022. Dennis and I somewhat kept in touch, and I supported his organization. However, I found myself feeling, like any other twenty-something, lost and directionless. Some life-altering moments led me to realize that something had to change. I missed that fire that I felt when publishing articles on mental health, lobbying, or penning elected officials to pass bills to make mental healthcare more accessible. Although I persisted with the latter two, I wanted to do more. I reached out to Dennis – this time with workplace experience in social media marketing and directing – and here we are!

Thanks so much for sticking around – not only to hear my story, but also for being here with us. I’m excited to continue the good fight and fight for mental health advocacy!