I need your help and here is the situation: 77% of all suicides here in the states are completed by men. Data geeks—-here is where I got this number: Total number of suicides in America = 42,773. Number of men completing suicide = 33,113. Do the math and here is the source:  http://www.cdc.gov/injury/wisqars/fatal_injury_reports.html

Mark Twain once said “There are three kinds of lies: lies, damned lies, and statistics! So enough about statistics—one suicide is too many, but here is the part that keeps me up at night. When you do something to help prevent suicide about 77% of the people who show up are women. Wonderful, caring women who are mourning the loss of a loved one to suicide and they are going to do something about it. Women are doers, nurturers, and flat out kick ass and take names when it comes to social causes—heck all causes—but where are the men? Where the hell are the men?

Background info: I mourn the loss of two men to suicide. I lost my brother Mark in 1983 and eleven years later I lost my younger brother Matthew to suicide as well and for years I was missing in action when it came time to doing something about it. When I finally got off my ass and got connected with some organizations that give a shit about suicide I noticed something very obvious from day one—-I was surrounded by women. Women, who often like me, were mourning the loss of a male to suicide—at least 77% of the time. Now there are exceptions, like the wonderful woman who runs the helpline I worked for when I lived in Illinois…she lost her mom to suicide and she has been an awesome advocate for suicide prevention ever since, but most folks I run into are missing a boy/man from suicide…at least 77% of the time.

Now here is where I truly need your help—-so fire away in the comments section or reach out to me personally—and here is your assignment:  HOW DO WE REACH MEN WHEN IT COMES TO SUICIDE PREVENTION?

I have thought of some type of men only comedy night featuring some well known comedians who may have struggled personally with mental health issues. Drew Carey has gone on record as having suicidal thoughts, in fact the comedic world is fertile with folks who struggle a bit with mental health issues and many will state that is why they got into comedy. They basically use the stage as therapy and benefit from getting out their darkest thoughts in public for all us to laugh at. For more proof see the movie Misery Loves Comedy. Men like to laugh at their problems, then do something about them, but definitely laugh first. Why laugh first? Because we’re basically idiots. Thus the 77% number for completed suicides.

That’s my idea—Bro Night Out with a select group of funny ass comedians. Throw a suicide prevention message in between acts and we have something. Sorry but no women allowed so we can talk like men, and of course, there will be wings and a cash bar. Now help a brother out and tell me how you think we can reach men! We need to take this 77% number down and down hard. That’s a terrible stat and if we are going to move the needle and decrease the number of suicides completed it just makes sense to aim for the biggest target!

Raise your hand if you suck at suicide!
Way to go Men!! 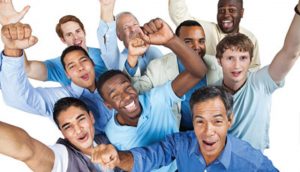