I may not be the ideal demographic for the Netflix series that seems to be taking the kids by storm these days called 13 Reasons Why. I’m a 53 year old white guy living in South Carolina and I had to watch this show. The series follows a bunch of kids impacted by the suicide death of a fellow student, Hannah Baker. Hannah leaves behind 13 cassette tapes detailing what drove her to this decision and this entire series is based on the 2007 fictional novel of the same name written by Jay Asher.

As stated above, Hannah dies by suicide and the producers of 13 Reasons Why have decided to show the act in the final episode. This decision has many experts in the suicide prevention business upset. Every suicide upsets me, even if they are works of fiction, but on the positive side, this show has forced us to have a conversation about suicide. A conversation we’ve been avoiding for way too long. As a Nation we are not very good at preventing suicide, in fact we stink at it.

The most recent data set is from 2015 and we had 44,193 suicides which is about 44,193 too many. The experts say that 90% of all the completed suicides have a mental condition that contribute to their death. If we fix the stigma associated with mental health, we can do a better job preventing suicide. Makes sense, but mental health is not a priority for our country. We closed many of our mental health hospitals and pushed those patients to the street. In my hometown of Columbia, SC you can go watch Tim Tebow play for the Columbia Fireflies on the site of our old mental health facility. That’s right America we tore down a mental health facility to build a minor-league ballpark. Ouch.

Back to the show on Netflix. I saw that a prominent psychiatrist is calling on Netflix to take this program off the air. Ok, let’s be real, that is not going to happen. Netflix is in the business of attracting viewers and 13 Reasons Why has done just that. How many? We may never know as Netflix does not release rating data, but the show is the most Tweeted about show in 2017—-do the math. Also, tell the kids that they cannot watch this show and you just made it more desirable. Chances are some child you love has already watched this show and I am suggesting that you need to watch it too. It is well done and will hold your attention.

Now I do have some issues with the show as well. There are a couple of scenes that are not needed, including the showing of the actual suicide, and the pivotal scene where Hannah goes to see the counselor is cringe worthy. His physical set up stinks on ice as his office has a ton of windows so anyone can see who is in there, oh, and he sucks as a counselor. His interview with Hannah is interrupted by text messages and phone calls and his advice is horrible. My experience with counseling has been so much better and this portrayal has me worried that some kids will now not seek out the school counselor. It’s that bad.

If your child watched this show—guess what? You have to watch this show. I logged into Netflix hoping it was like a four-part mini-series but no! There are 13 episodes and they last about an hour each. The kids binge watch this and can knock it out in a weekend, but as a working adult “ain’t nobody got time for that”, but you NEED to make the time. Two episodes a night and in one week you are done. If you have kids of age—high school or older—watch it with them and be prepared for a major debrief after each episode. This conversation needs to happen and we need to keep an eye out for a phenomenon called contagion. Kids will copy what they see if they are vulnerable and watching this show made me depressed for about a week. It’s a heavy topic and there are sexual assaults, booze, drugs, and life. 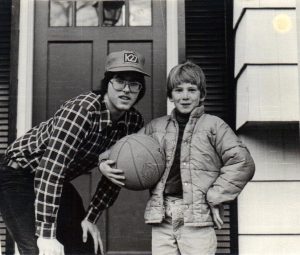 I am in the suicide prevention business as I speak to organizations about the warning signs associated with someone who may be at risk for suicide, and I talk about how I got back on my feet after the loss of my two brothers to suicide. That is not a typo—I lost two brothers to suicide eleven years apart, so I have some serious skin in this game. With that said, I am glad that 13 Reasons Why force us to have these tough conversations because I know for a fact that we were not having them on our own. We are losing more and more kids to suicide and something must change. We cannot waste this opportunity to converse about this subject and we all have to get past the Why and move to the What Now. Netflix is not going to pull this series. In fact, they are working on Season Two. As a country, we have 44,193 reasons why to watch 13 Reasons Why. Again, I have two reasons: My brothers Mark and Matthew. Rest in peace brothers, rest in peace.

Dennis Gillan is the President of DGIF, LLC and speaks about suicide prevention. He is also on the local state board of the American Foundation For Suicide Prevention and the South Carolina Youth Suicide Prevention Initiative. His website is www.dennisgillan.com or you can catch his latest info on FB: https://www.facebook.com/DennisGillanSpeaker/ Twitter: dgillan Instagram: dennisgillan
He is too old for Snapchat.